Dave Collins (37) started as innovation manager in FME ZEN on 1 January 2023. A job he is looking forward to embarking on. 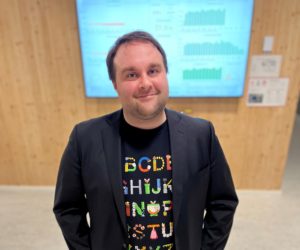 He has been affiliated with NTNU for almost 11 years. “I usually say that I’ve been looking forward to going to work at least 99.5% of these days. A joy that I’m sure adds 20 years to my life,” he says with a smile.

Getting the job at FME ZEN was huge. “When I saw the announcement, I was completely euphoric. I really want this job, I thought! And when I got it, I was incredibly happy and grateful. I’ll do my best,” he said after a week on the job. There is still a lot to learn and new colleagues to get to know. But that shouldn’t be a problem for Dave. He is extensively sociable and talks to everyone. A past as a stand-up comedian doesn’t hurt either.

Global perspectives
David was born and raised in the UK, specifically Wales. He moved to Norway and Trondheim in 2012 to take a master’s degree in globalization, global politics, and culture. By then he had already worked for a member of the British Parliament for a few years.

“She was a fantastic, capable politician. But I found that academia might give me more influence than going into politics itself.”

During his master’s degree, he worked at SINTEF Technology and Society, and then earned a Ph.D. in sustainable facility management at NTNU’s Department of Architecture and Design. And that sealed fate in many ways, he claims. Today he has a partner and a three-year-old son and is safely located in Trondheim.

Smart cities
He has recently completed a postdoctoral position at the Department of Construction and Environment and worked in the research project CAPS – based on smart cities.

“Here we wanted to close the gaps between developers and users/communities and see how they could engage more. This happened through extensive interviews, meetings with the citizens, and participatory projects so that they could say what they thought, wanted, and believed.

David Collins wrote the reports and is in fact very fond of writing. In this regard, it is worth mention that in 2019 he was awarded the ‘European Researcher of the Year’ – award for his contributions to the promotion of “knowledge in Facility Management and its effective use in practice and education” by EuroFM.

Interdisciplinarity
“Working interdisciplinary is the key word for what we do at FME ZEN. I am convinced that the knowledge and experience I have accumulated during my years, both in politics and academia, will be useful in this context. It is about building bridges between knowledge – industry – the public/people. I am good in networking and want to connect the partners in FME ZEN more closely to us and focus on innovations that can contribute to changes. After all, we are talking about knowledge for a better world,” he says.
– Finally, David – what is it that we don’t know about you?

– Ah – except that I’m a passionate brewer, book reader and gamer?

“It must be that I worked as a volunteer in Barack Obama’s campaign the first time and had the opportunity to do a high-five with the man during a rally. Fortunately, there were several photographers who were able to take pictures, because otherwise I wouldn’t have been believed,” he says and laugh! And here is the evidence; 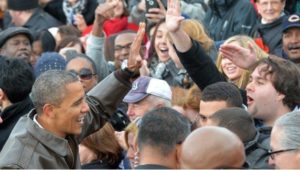 A young Dave to the right, with his arm raised, ready to give Barack Obama a high-five, back in 2007/8. Photo: Privat

The Norwegian University of Science and Technology (NTNU) is the host and leads the Centre together with SINTEF community.